*PINK WILL BE IN STOCK IN LATE OCTOBER

Meet PAWD®, KindTail’s first product, which revolutionized the out-of-date pet crates by creating a comfortable, stylish, and versatile nesting space that easily integrates into modern homes. PAWD® is an easily collapsible, safe, and lightweight nesting space that provides the coziest space for your fur baby.

The set up was fairly intuitive but I’m not quite sure if there are supposed to be see through gaps at the back of the kennel where the back panel attaches to the base. A plastic bit came off - not sure if it was a left over from the manufacturing process or whether a piece chipped. Overall the crate is very very pretty. I’m going to wait until my puppy finishes teething otherwise I’m pretty sure she could chew through the plastic. My older dogs like it! We purchased a medium pawd for 14”-15” Shelties 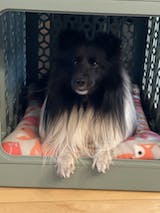 C
Customer
Love the looks of it!!!

I just wish it would have a divider. Then it would be PERFECT!!!

The minute I set it up he began moving in his things! I didn’t even have to bribe him. Just decided that was his new room and dragged his toys, blanket and nylabone inside. So I’d say he loves it. We’ve had it for almost two weeks now and he sleeps in it every night with no problems.

The only negative thing I have to say is the shipping due to Covid it’s took longer than expected. Customer service was amazing they always respond when you email them. My 11 week old Yorkie love’s it and so do I.

L
Leah S.
Attractive crate, quality of the clip mechanisms could be improved, handle should be added

We like the appearance of this crate and our dog seems to like it so far. When it first arrived multiple of the clips on the crate were broken, as well as the hook on the front door; they are entirely made of plastic, and don’t seem very sturdy (I don’t think it would hold up well to being taken apart very frequently). It seems to me that the clips themselves should likely be made out of sturdier material, at least the internal part where they actually hook on to the crate - it would not impact the aesthetic of the crate. I would say 5/5 for aesthetic, 3/5 for quality, especially at this price. The staff at KindTail were very helpful and did send a replacement crate, which we really appreciated. The medium crate also unfortunately doesn’t have a handle when collapsed; I’m not sure why, but it absolutely should, or they need to make some sort of strap so that you can carry it more easily. We hoped to check this with us when flying but it would be a pain as is very cumbersome to carry even though it isn’t heavy; we likely would check it inside of a suitcase, as I also am not sure that the clips would hold up in checked baggage. 4 stars because we really like the appearance of this crate, but definitely some improvements are needed.